Welcome to week six of The Accidental Novelist’s “Free Tune Friday” feature! (You can check out previous entries HERE.) This week’s tune represents a little milestone from my recording days and the first of a two-parter…

When I first started writing and recording songs in the mid-90’s, I used a little Tascam “Portastudio” four-track cassette recorder. Those were heady days–I was living the Boston area and cranking out one song after another. I had very little recording skill–to match my meager guitar-playing skills–but it didn’t matter. All these great DIY bands were inspiring me to just cut loose and have fun.

Several years later, I decided to upgrade my equipment and go digital. So I plopped down a bunch of money for a ZOOM MRS-1044 multi-track recorder. Ten separate tracks that could be batched to create an infinite number of layers, a built-in programmable drum kit, built-in guitar effects and amplifier emulators–the gadget blew my mind. My recording possibilities increased exponentially. I did miss a little bit of the old four-track cassette sound–that slightly hissy, lo-fi AM radio quality–but I never seriously looked back. Of course, the “Zoom Box,” as I call it, is an antiquated relic in an age of Macbooks and recording software.

This week’s tune was the first song I recorded on the new multi-track. Having drums elevated my songs to a whole new level, and for a canned drum kit, the sound impressed me. I had great fun layering the guitar in this song–I basically recorded three separate lead guitar lines independent of each other against the rhythm guitar. The tracks intersected and separated back and forth, dancing in and out of each other, creating a wonderfully textured effect. As a long-time Sonic Youth fan (Daydream Nation was one of my first CD purchases as a teenager), it was so gratifying to have the opportunity to capture a little bit of that raw guitar sound against a rock-steady, simple drumbeat that I’ve always loved them for. 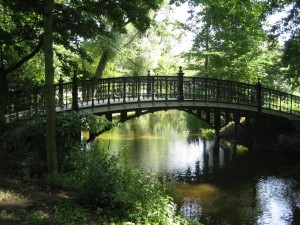 Lyrically, the song derives its inspiration from my first trip to Europe. My wife and I had just moved to Vermont. I was going to start teaching at my alma mater, Lyndon Institute, that fall. That July, Erica and I threw all our stuff into the on-campus house we were renting, grabbed our backpacks, and headed off for a three-week tour of the continent. The track’s title comes from our trip to Vondelpark in the heart of Amsterdam, a lush oasis of canals, flowing willows, and greenery in the midst of the beautiful Dutch capital. After five wonderful but exhausting days in Paris, it was a refreshing change of pace to spend a sunny afternoon along the grassy banks. Later that night, we went to see Yo La Tengo, one of my favorite bands who just happened to be on tour, perform at a club in the city–the perfect day!

Next week, it’s off to Florence…

He wandered out despite the embers in his eyes,
Smothering them beneath the darkened lens’ core.
Fighting back all the urges that rose up to bite him,
He still could smile just like them.

He slipped around the freaks still beating on their drums
And shied away from older couples wanting more.
Driven by the shield that always hungered for nobody,
That’s how he wanted things to be.

He finally found the place where no one ever goes
And slipped into the song that haunted him no more.
So caught up in the world he made he never noticed
Nobody wondered who he was.

Like some leftover Eden, a place that knows no seasons
And never needs a reason to make you stay.
Between the always Adams and ever Eves still laughing
Lies the tree that matters that no one needs,
They’ve all had enough to eat;
They can’t hear the apple weep.

To listen to this tune, click HERE. To download, right-click on the link and select “Save Link As.” For best results, apply headphones. Thanks for listening! Be sure to come back for next Friday’s installment…