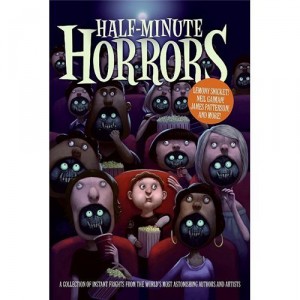 A couple years ago, Susan Rich, my former editor at Harper Collins, invited me to contribute a piece to a collection she was working on called Half-Minute Horrors. The challenge was to write a spooky story aimed at middle-grade readers (9-12 year-olds) that could be read in under a minute. I came up with the following story one morning in the shower. (It’s amazing the epiphanies that come to one in the bathroom…)

I told you last night, I won’t hurt you. Not me.

Yes, the house was just as moldy and awful when we came here too. Father was dead in the war and my little brother cried every night. But it wasn’t just for missing Father. It was that man.

He showed up not long after we got here, seemed to cast a spell over Mother. Not us. It was the way he moved. Smooth and quiet, like a slinking wolf. And he hated us. This was his house. That’s what he told us.

One night, James wouldn’t stop crying. The noise brought the man up to the top of the stairs, to throw open the door.

“Why are you crying?” he growled at us. “What are you afraid of?”

“There are no monsters,” I hissed. “Stop crying and go to sleep.” I just wanted that man to leave, to close the door and leave us to the cold.

He didn’t say anything. He just laughed. That’s when I saw the eyes start their glowing, a devilish red in the darkness.

It didn’t take long, what happened next.

So that’s why I’m here. So many years later, and I’m still here. Still eleven. Always eleven, just like you.

I’m a real fan of flash fiction–an increasingly popular form in writing circles these days. There’s beauty in brevity, and I often find having to work within certain constraints fosters rather than stifles creativity. (As any formed-verse poet will tell you…).

What was especially cool about Half-Minute Horrors was having my work appear alongside some amazing authors–Margaret Atwood, Francine Prose, James Patterson, Michael Connelly, Neil Gaiman, R.L. Stine, Lemony Snicket, M.T. Anderson, Jerry Spinelli–from both the world of adult and YA fiction. Best of all, royalties from all sales go to First Book, a non-profit that provides books to children in need. Buy a copy today and support this worthy cause! 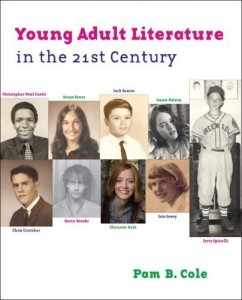 Not long after Doppelganger came out, I was contacted by Pam Cole, a professor at Kennesaw State University in Georgia, who asked if I’d be willing to contribute an essay to a book she was putting together called Young Adult Literature in the 21st Century. The assignment was “What it Means to be a Monster.” It was the perfect topic, since that pretty much summarizes what Doppelganger is about. As I often do, I drew upon my life as a teacher for inspiration. The result was a short piece that I called Grendelescence–a portmanteau of Grendel and adolescence–for reasons that will become clear when you read this.